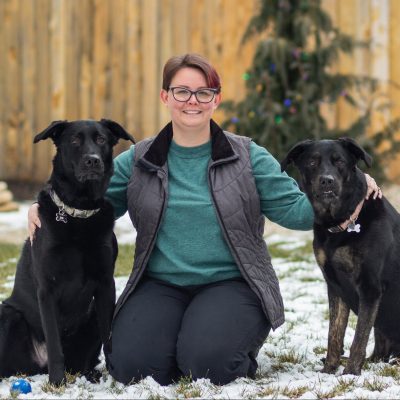 Rachael spent eight years in the Marine Corps where she met her husband. She has three children and is an animal lover. While choosing her next move from the Marine Corps Rachael looked into Dog Training. At the time they had a very energetic golden retriever named Mya. With her “selective hearing” Rachael needed to find a better way to gain the behaviors they wanted and save her sanity. So in 2007 Rachael finished her certification from Animal Behavior College and started her dog training journey.

Rachael completed her pet massage certification in 2020 to help furry patients and their ongoing needs. In early 2021, Rachael earned her reiki level 2 certification and in January 2022, her Animal Aromatherapy Specialist Certification. Rachael’s thoughts are, the better knowledge she has, the more she can help her clients and their animals.

Rachael is currently the facility manager and trainer for a doggie day camp and boarding facility in Boise, Idaho. She continues to teach group obedience classes, pull out training for dogs at day camp and private lessons. Rachael does aromatherapy consultations at the dog center as well as in-home consultations.

Rachael offers remote appointments via Zoom, Phone, and Email. In-person consultations are available to those living in Boise and the surrounding areas. Contact her today to request a consultation!